Take for instance the guiding principle of "Black Women". I am not understanding this one. Why isn't "Black Men" a guiding principle too? Aren't black men challenged as well with injustice? Or is it that saying "black women matter" doesn't negate that black men matter? Is the reasoning that black women have more of a struggle than black men? Or is the reasoning that when people say black, they typically mean black men so we have to call out black women specifically?

"Black Families" is another guiding principle that specifically calls out its purpose for mothers but mentions nothing of black fathers. This raised an ​​eye brow for me. I am sure their is a rational reason behind it but I would like to understand it.

Another guiding principle is that of "Black Villages" which states, "We are committed to disrupting the Western-prescribed nuclear family structure requirement by supporting each other as extended families and "villages" that collectively care for one another and especially our children to the degree that mothers, parents and children are comfortable".

In Caribbean soca parties, artistes always do a roll call asking people where they are from. "Anybody from [country/city]?" He/she purposely leaves out a group/city in the roll call and then starts singing "Somebody missing...somebody missing!" And the crowd is whipped into a frenzy.

Read the "Black Villages" principle again! Would you agree that somebody is missing?

The Black Village principle mentions "mothers, parents and children" and neglects to mention fathers. Neglect black fathers? A demographic that needs to be roped back into the fold of the black village more than ever? A demographic that needs to feel "comfortable" after society has given them pathetic mixed messages about masculinity and fatherhood?

I believe that language is important. The language we use can put some powerful things into action but language can also cause some serious things to fall through the cracks. Why would this BLM guiding principle not call out the importance of the comfort of black fathers in the "Black Village" too? Sigh...

I voice the questions that I believe other men and women are silently asking. I am not the first one to have questions. Are we not saying anything because we think we need to fall in line? Have we as men been beaten into submission? Into silence? It seems as though the BLM guiding principles have specifically called out and elevated every black life EXCEPT that of the straight black male - the ones being disproportionately shot up!

I am genuinely confused. As a researcher, I am always in observe-mode and I notice a dynamic. I had some of my observations corroborated during a conversation a couple weekends ago with a powerful, independent black woman. During this conversation we bantered back and forth and we talked about the numerous posts on social media in which black women share memes "celebrating black love". Despite this public show of support, I know I speak for some of us black men that are not feeling the love and support.

Some of us wonder if the straight black male...the so called "cis-gender" is being pushed to irrelevance. Is this so? What is wrong with being men...black men now? Why can we so publicly verbalize the need for black fathers and stories of absent dads, but a movement with such a voice blatantly leaves them out of its guiding principles? Is the cry for black fathers elsewhere just a feel-good sound byte?

I need some answers, some enlightenment and some guidance. So, what are your thoughts? Help me! Because I am sure I might be wrong about this. Read the guiding principles here! 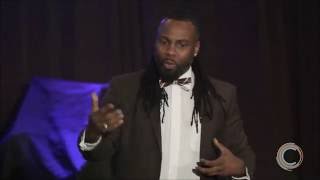